Much about this Maraetai property was great — the spectacular sea views and well-crafted Spanish roof. But there were still some things, both inside and out, that left much to be desired. 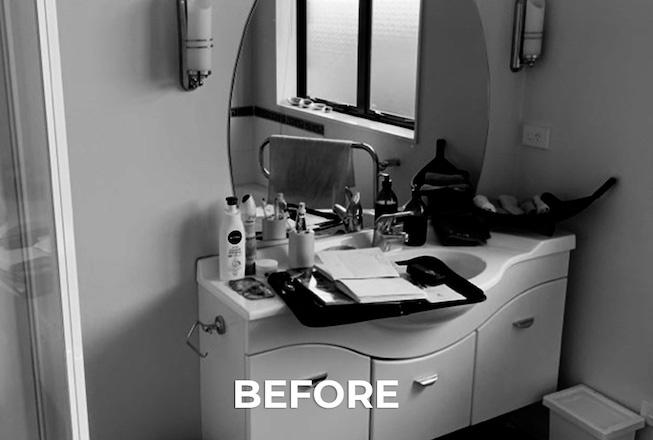 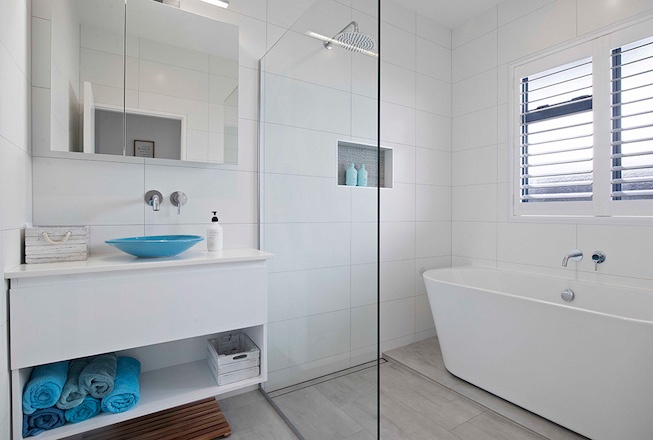 Overlooking the Tamaki Strait with Waiheke in the distance, Leslie and Michael’s four-bedroom, two-bathroom home is situated high in the hills amongst palms, ferns, and other native plants. But that breezy coastal feeling was stopped dead in its tracks the minute you approached the home.
A bulky, circular, almost Art Deco-esque overhang loomed over the entranceway and diminished the otherwise attractive kerbside appeal. Inside, the main bathroom, ensuite, and laundry needed an update as well.
Ready to make some changes, the couple reached out to Refresh Renovations to get a fresh set of eyes on their interior. When Renovation Consultant Kim Reiche visited their property, Leslie and Michael also queried possible alterations for their home’s exterior.

There was minimal back and forth during the concept and costing phases. Leslie and Michael’s project was design-led; they had a look in mind and achieving it was more important than the cost. Kim presented them with concept designs for the bathrooms and laundry, together with exterior upgrades, all of which could be completed for just over $180,000. Had they wanted to make any alterations, this is the ideal point in the Refresh process to do so, but the couple approved both the designs and the estimate and were happy to move forward with construction.

Luckily for Leslie and Michael, Kim is also an architect and did the planning for their project herself. She arranged for the front deck extension to tie in seamlessly with the existing roof structure, a challenge she pulled off.
In addition to the architectural planning, Kim arranged a talented crew of contractors and tradespeople from her network of industry professionals. They began with demolition, clearing out the bathroom and laundry to make way for the new designs. Then came rebuilding; plumbing and electrical, stopping, painting, and tiling before any of the fixtures could be installed.
Outside, the crew built the deck and roof extension that Kim had designed, installed horizontal aluminium shutters, and gave the garage door a fresh coat of paint. Unavoidable setbacks throughout the construction were caused by COVID lockdowns and delays with supply deliveries. But Kim maintained open communication with Leslie and Michael so they were well informed of the schedule changes. They were patient and understanding and, even with the hiccups, the renovation was completed in just 10 weeks. 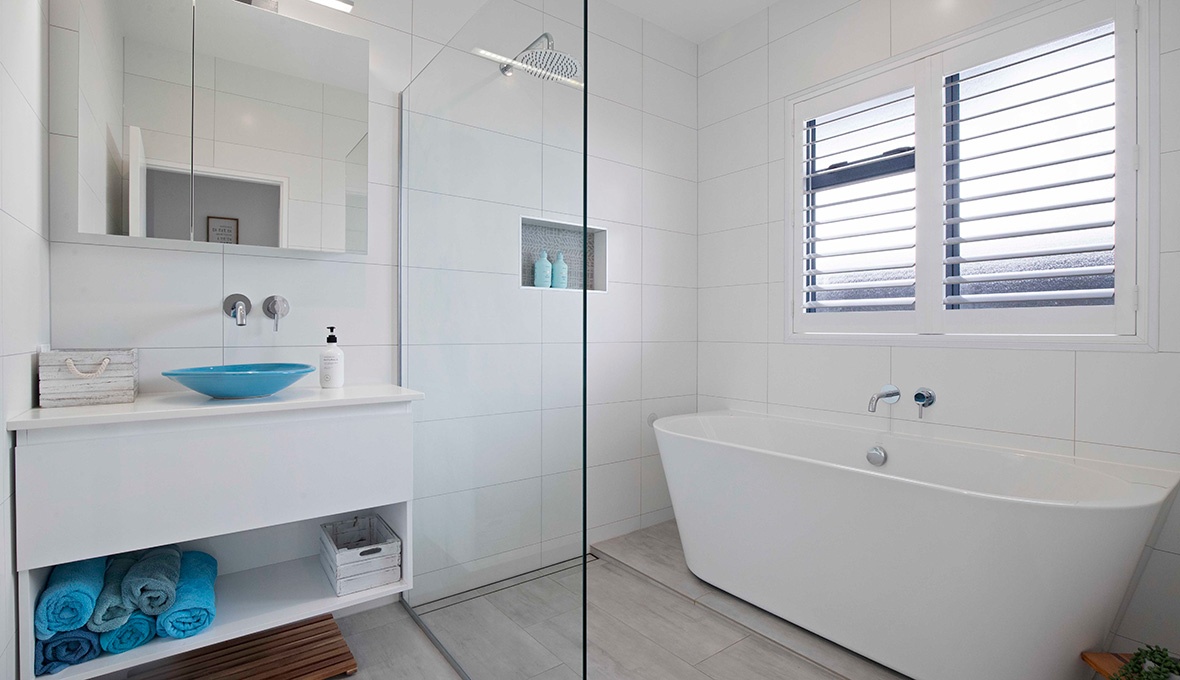 The ensuite and main bathroom have the same overall design with a few varying elements. Oversized stack bond tiles run from floor to ceiling and envelop the whole main bathroom, a simple pane of glass separating the shower and bathtub from the vanity makes the space feel like a spa-style wetroom. An aqua vessel basin, the only pop of colour used in the predominantly white bathroom, is an elegant focal point.
In the ensuite, the walk-in shower is roomier now that it doesn’t have to share floor space with a bathtub. The dual chrome showerhead evokes feelings of an outdoor shower, enhancing the subtle beachy aspects of the design.
The new laundry room is well-appointed and practical. There’s enough space under the bench to comfortably fit both the washing machine and dryer which is often preferable to a stacked configuration. A deep tub and lots of cabinet space round out the simple laundry area, all concealed by an exposed sliding door with the same beadboard pattern as the bathroom doors.

When approaching Leslie and Michael’s home, you’re now greeted by a generous gable-ceilinged extension with a roof that blends readily with the existing Spanish tiles. Under the cover of the overhang and with privacy provided by the aluminium shutters, you can take in the stunning vistas of the bay. The resort style appearance of the extension evokes an ambience of tropical surroundings.

Kim is proud of this renovation and the entranceway in particular. The extension has totally transformed the way the property presents to the street. Improvements for the interior are just as impactful with the stunning tiled bathrooms and highly functional laundry. Now, thanks to Kim, her talents, and those of her team, Leslie and Michael have a complete home that looks beautiful both inside and out. 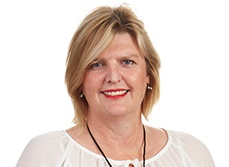 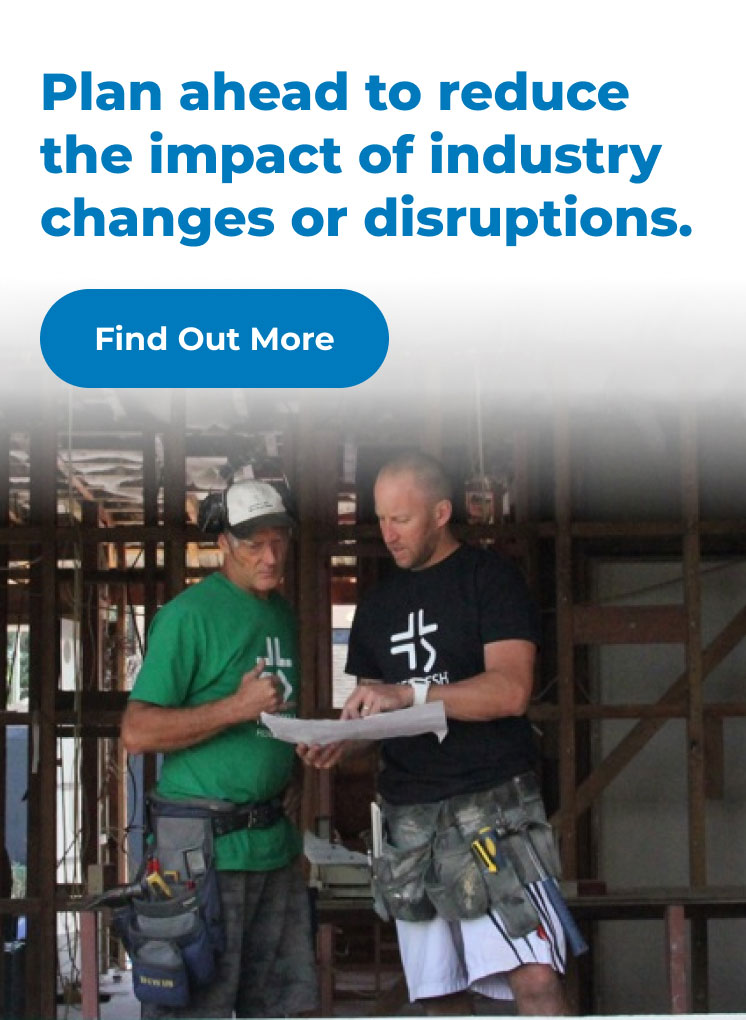 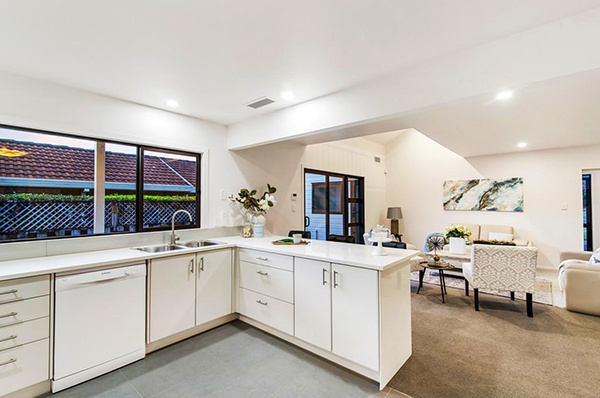 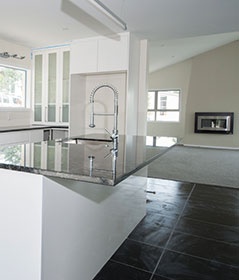 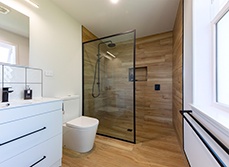 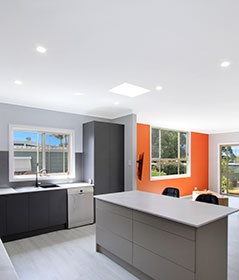 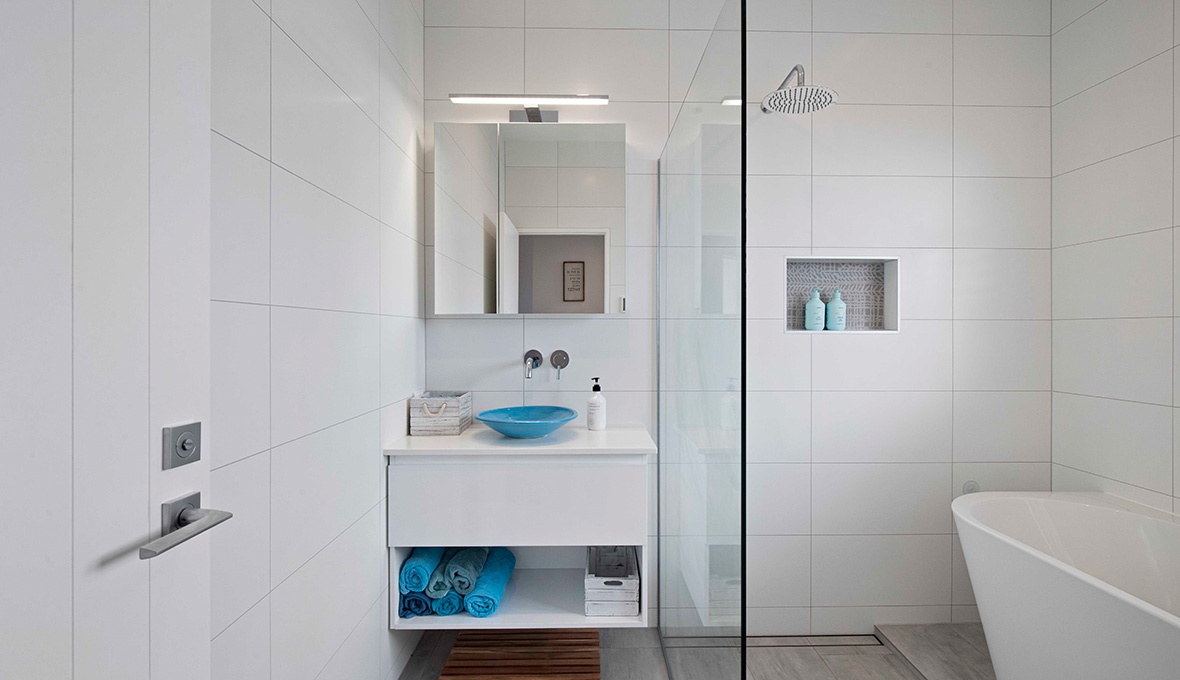 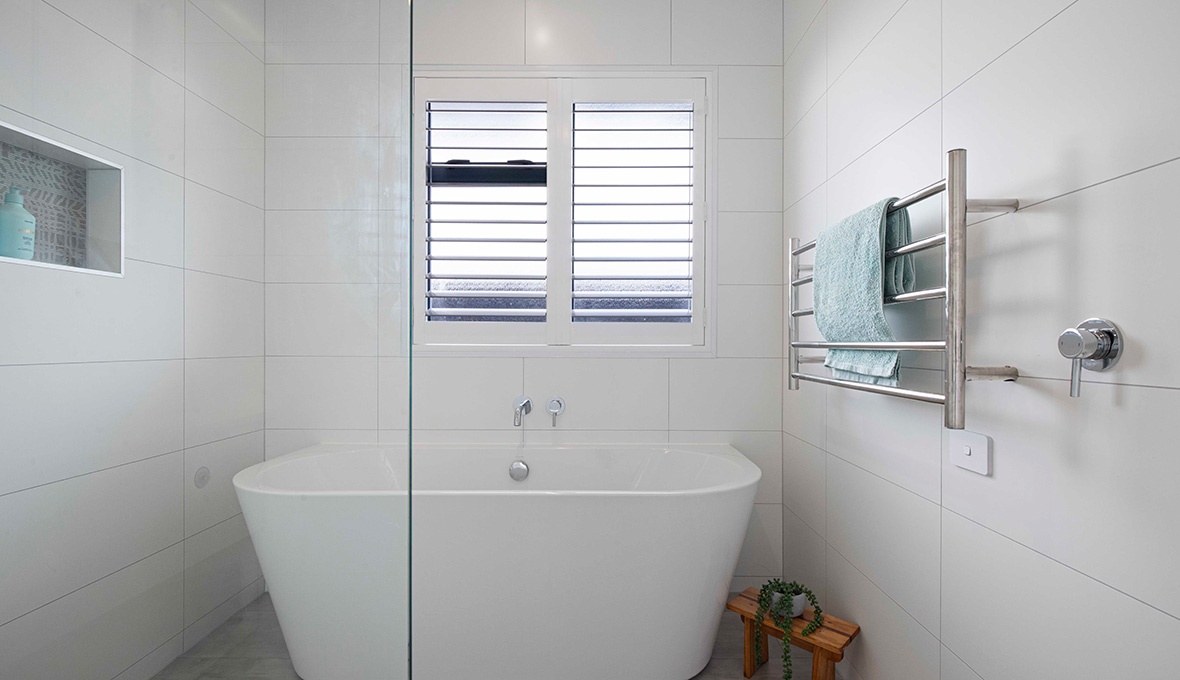 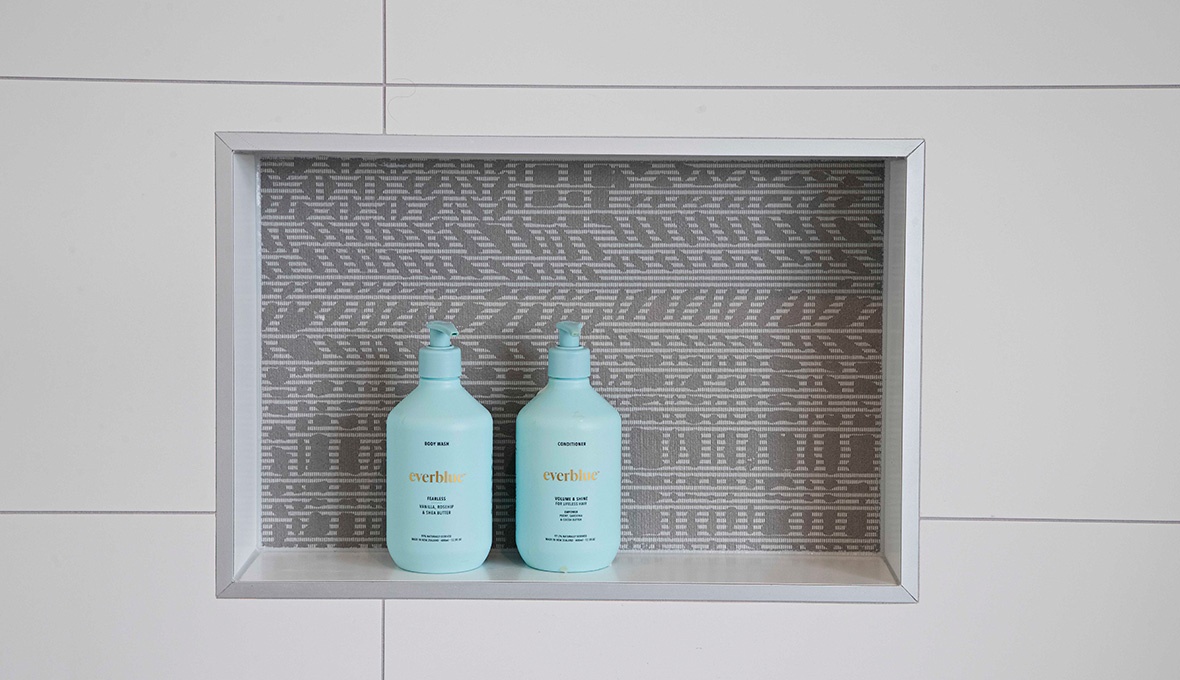 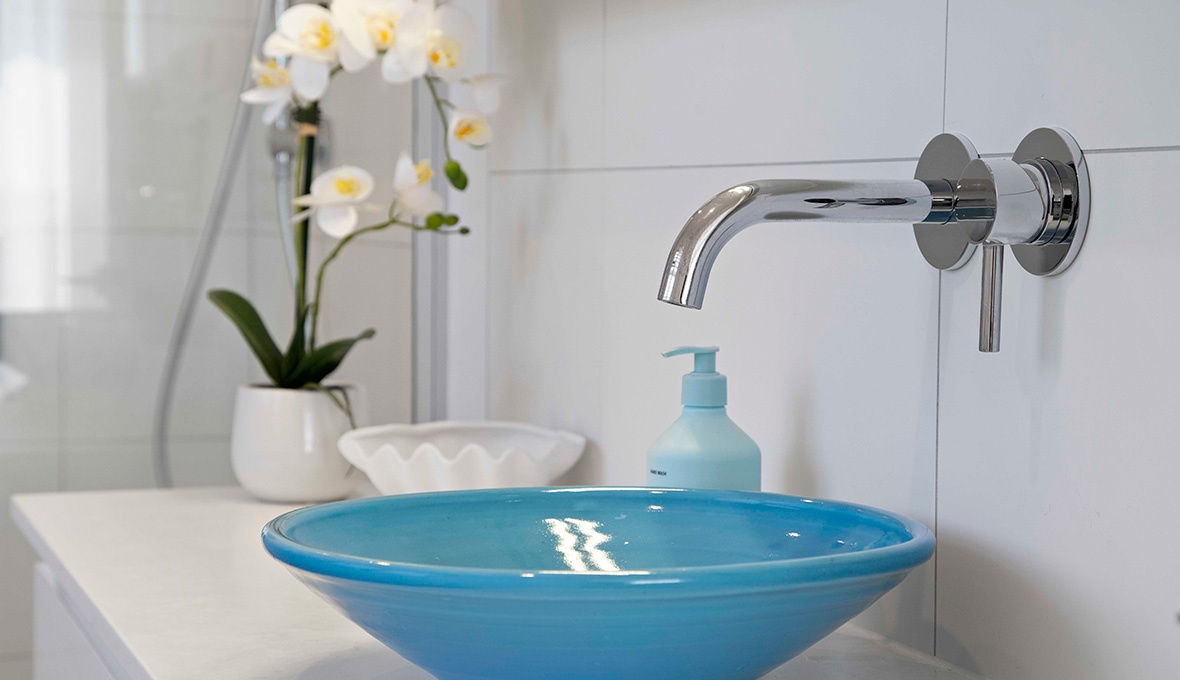 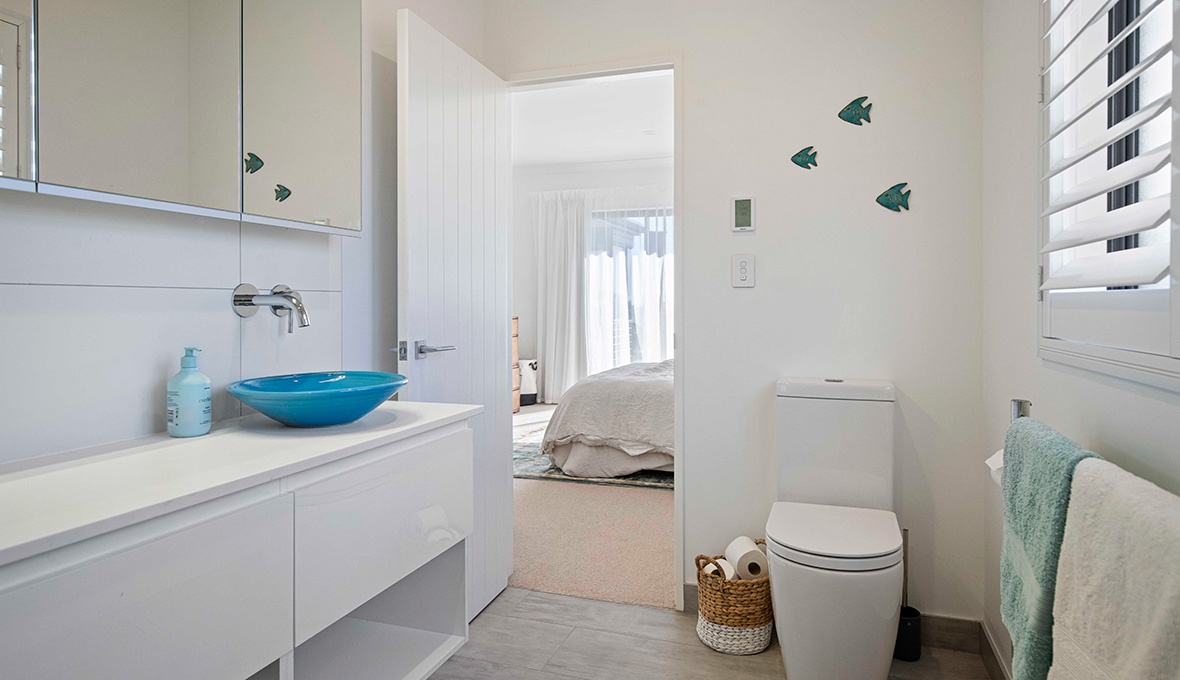 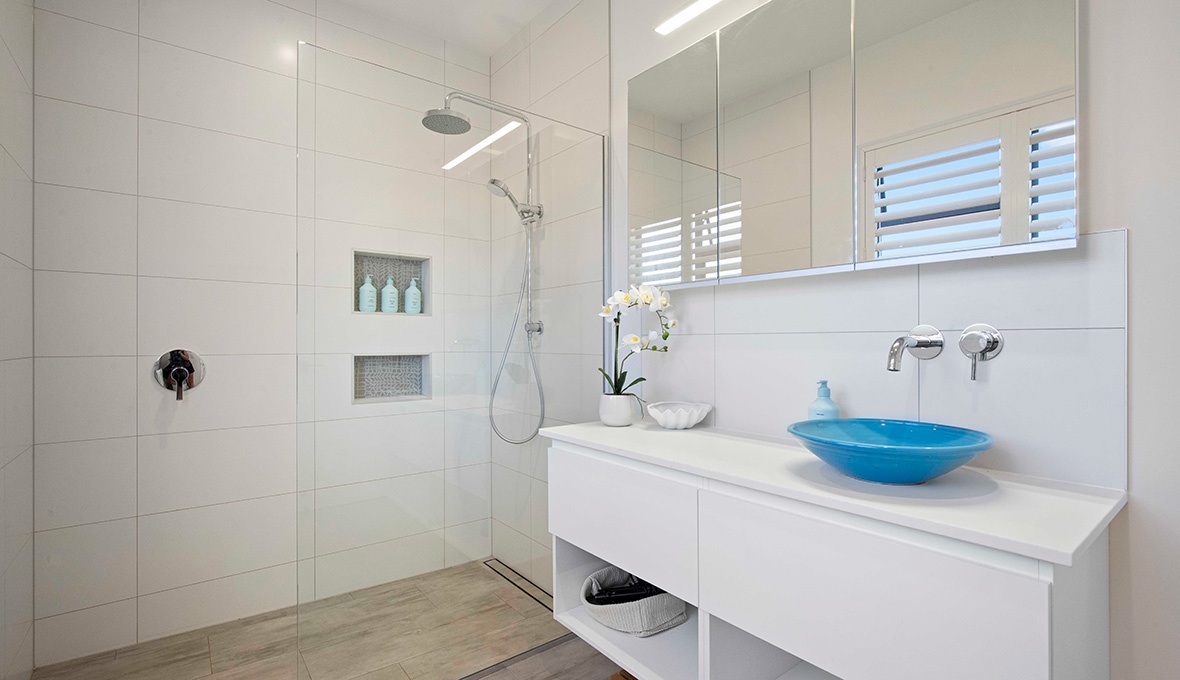 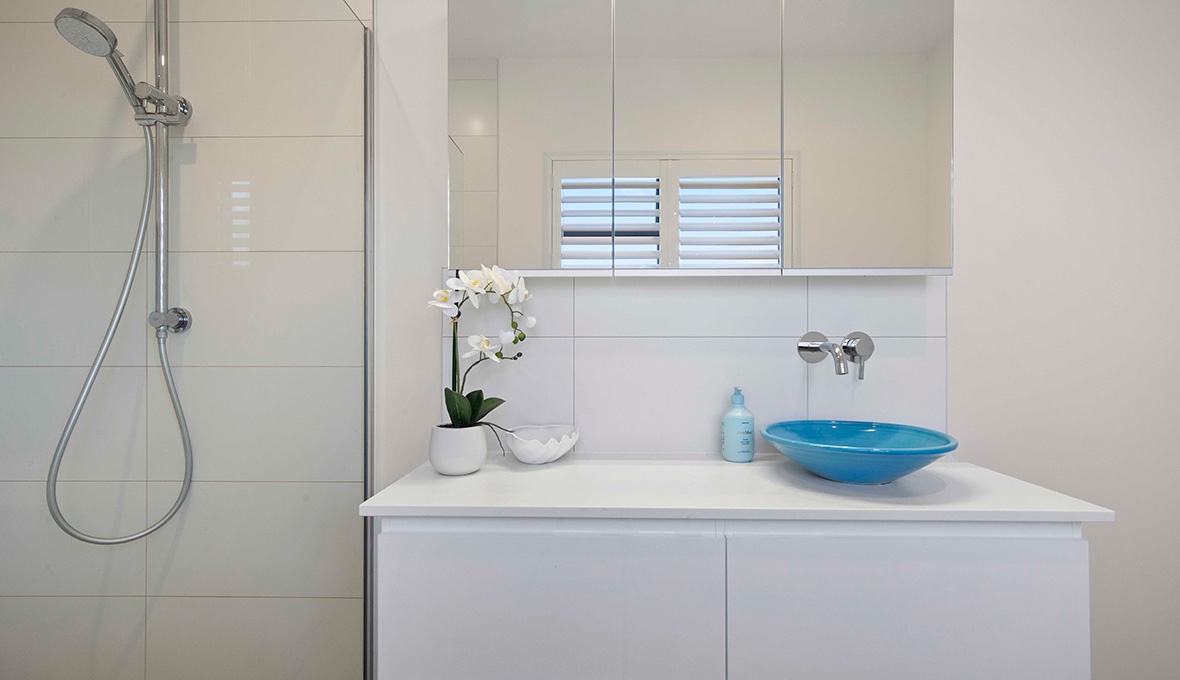 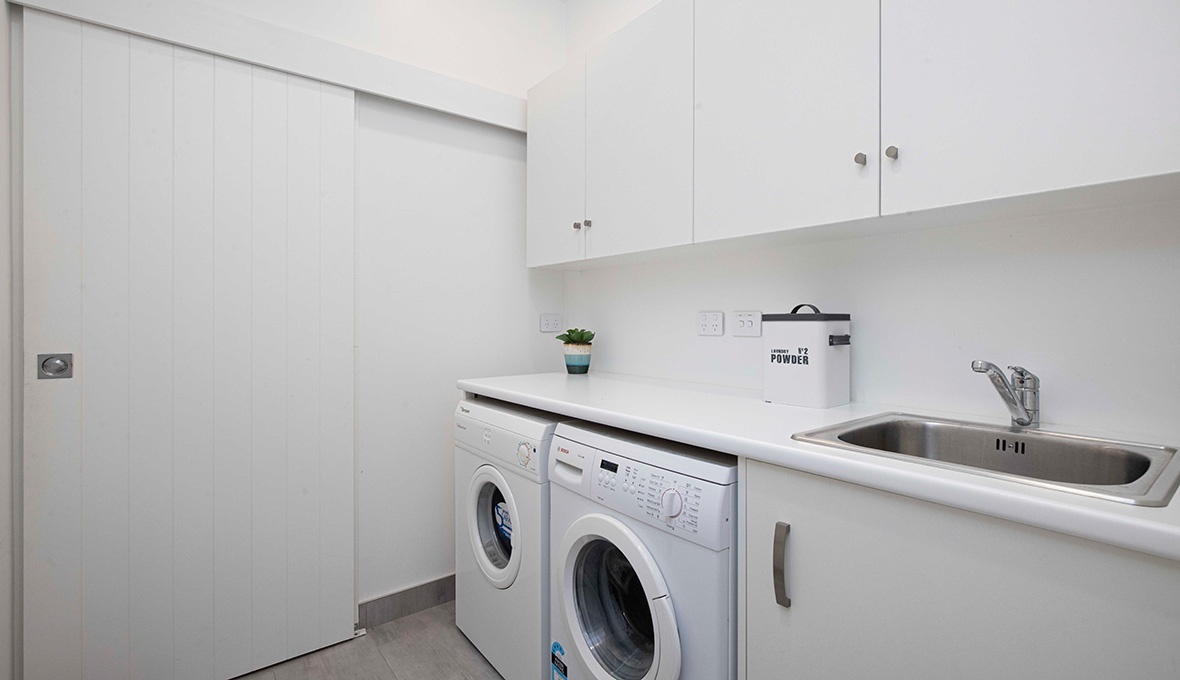 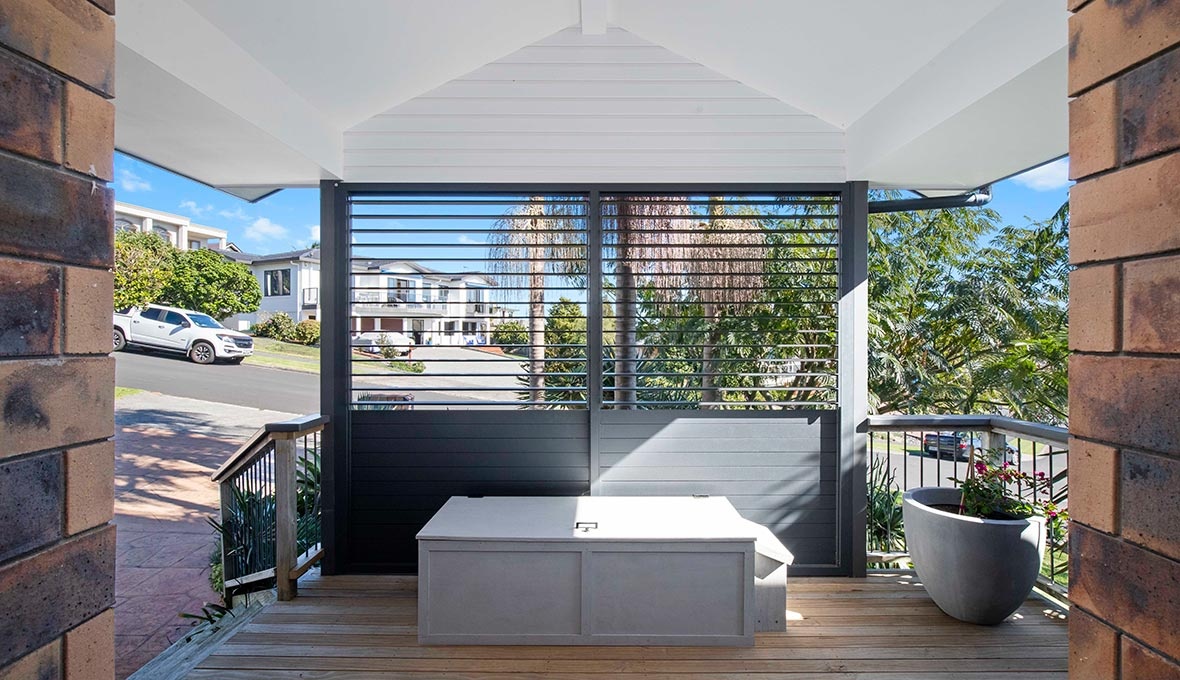 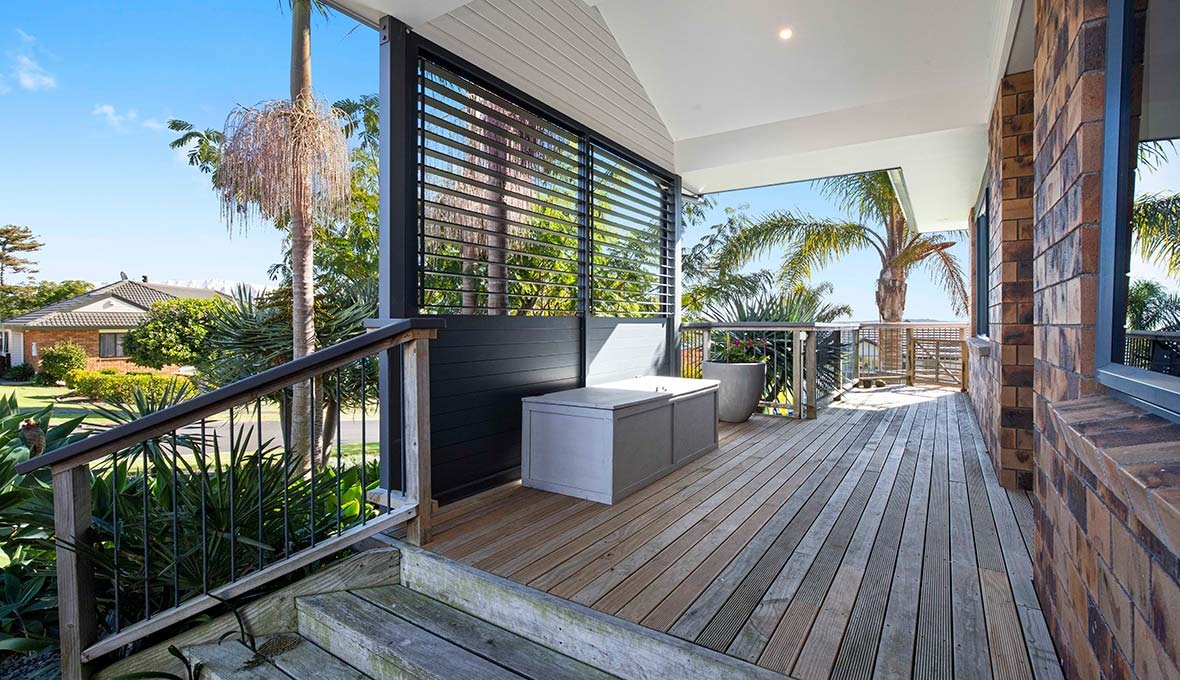 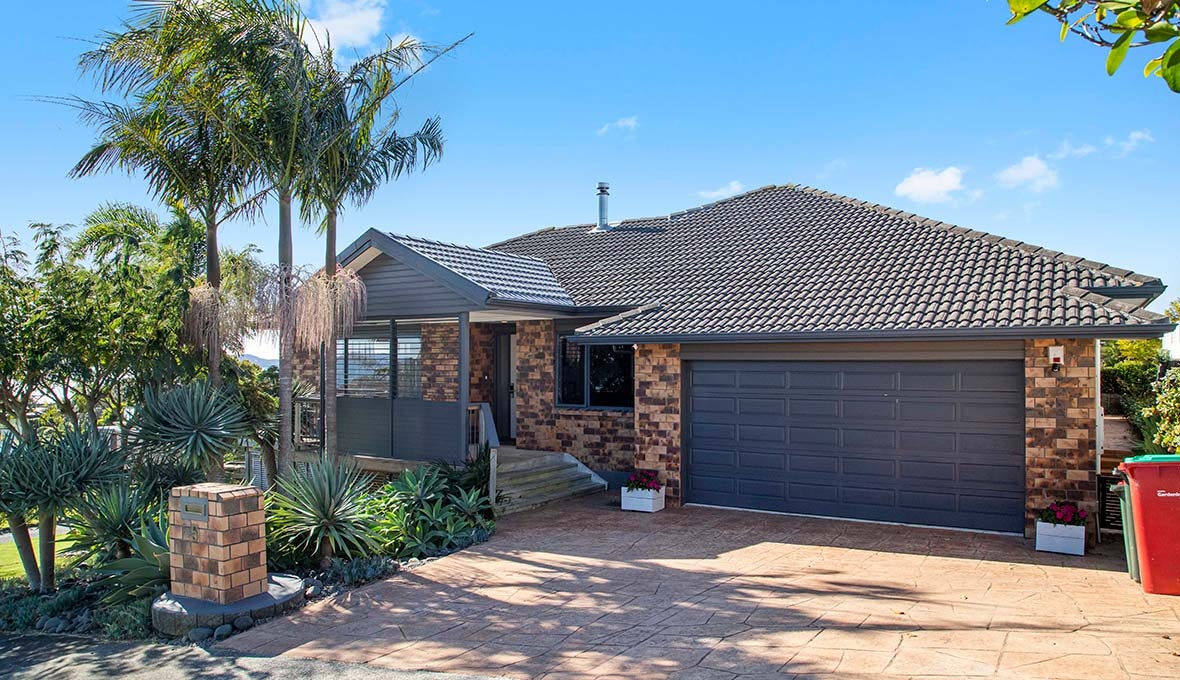 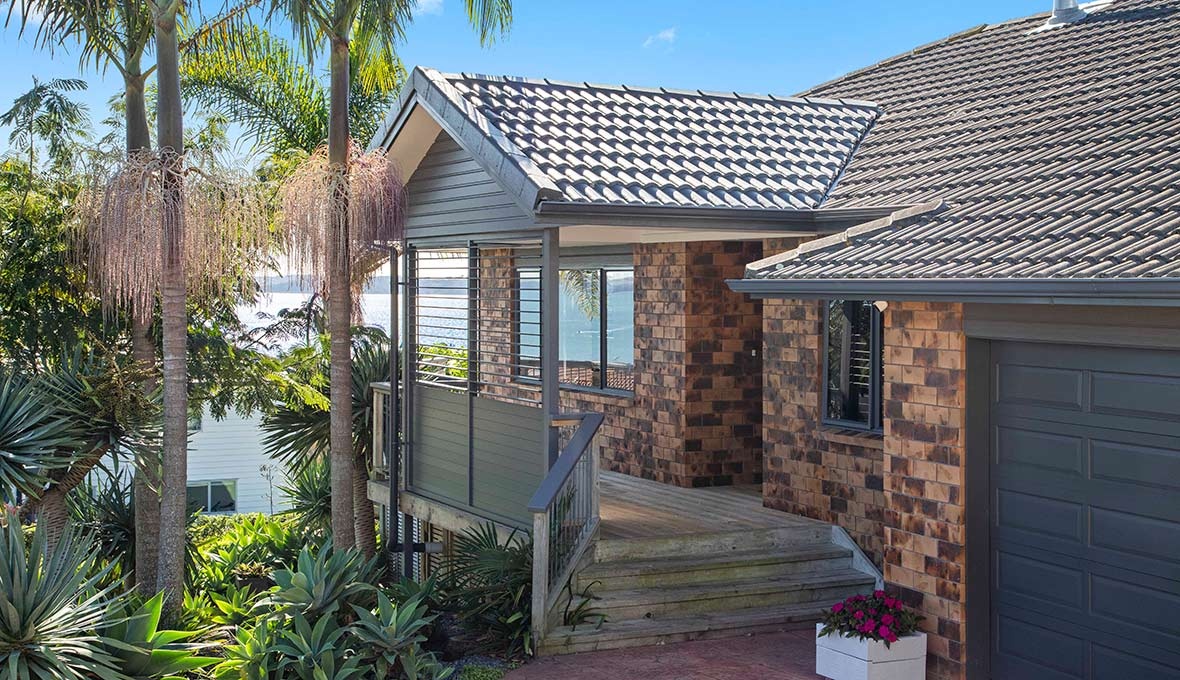